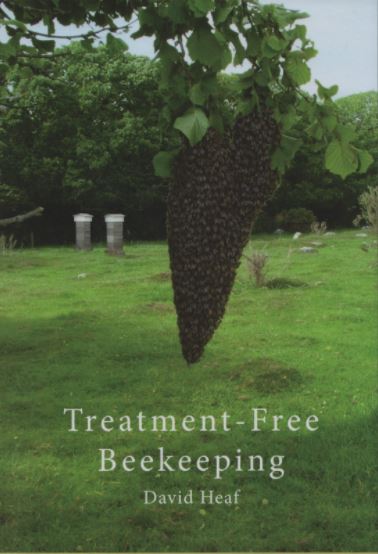 Rigorous metastudy marshals the evidence and pushes the debate forward

This is a seminal work – the first comprehensive review of treatment free (TF) beekeeping around the world. The writing style is readable yet academically precise – no urban myths here, every statement is verified by reference to data and academic papers. The pattern that emerges is that you can easily help bees express a large repetoire of useful behaviour and abilities, which standard texts ignore, so there is something here for every level of reader.

David Heaf is well known for his books and courses combining the use of Warré hives and TF beekeeping. But perhaps more relevantly, he is also one of the great networking nodes in this area: running a major international forum, connecting people, and as a nexus, he monitors and is sent an awful lot of information that may pass others by. With a background in research biochemistry and technical translation, he regularly uses the forum to publicise and explain somewhat abstruse scientific papers, and is up to date with discoveries outside the Anglosphere. Oh, and he’s kept bees for two decades.

Perhaps it was when Neumann and Blacquière published their 2017 paper on Darwinian Beekeeping that academia suddenly woke up to how many small scale beekeepers had already solved the problem of varroa, using simple open mating, natural selection and not worrying about the exact mechanisms. This contrasted sharply with 30 years’ singular lack of significant progress by conventional breeders attempting to control and reinforce single traits.

This book looks at the successes, and a few failures, of non-treated apiculture over that 30 years; and the overwhelming message is “this works, with caveats”.

Caveats include that relying on natural selection can result in high losses in countries where the bee stock is dominated by non-native bees (imports); yet in places using established wild landraces, it’s like pushing at an open door. And despite the emphasis on static hives, there is also a lot here for bee farmers to ponder and perhaps adapt – because he covers a wide range of techniques.

So, to the meat of the book. This deceptively slim volume distils a myriad of sources and took me three days to chew through, partly because many of the 287 (!) references looked so interesting that I kept interrupting myself to check them – not the usual dry academic fare. The book is dense with relevant and fascinating information from the cutting edge of beekeeping. And it’s concise, a rare quality in bee books – so usually pontifical – because it’s focused on objectively summarising findings from various studies to clarify the big picture (does treatment free beekeeping work?), leaving you to follow references if you want more detail.

The book has a clear structure, which can be summarised as:

This structure, and an excellent index, makes it very easy to find information as well as giving a logical flow to the reading experience. Pictures are high quality, lots of detail can be seen.

What did I get out of this? Many of the references were new to me and merit further study: this book is like the tip of an iceberg with signs to information I’d never have found myself. It doesn’t just cover key works and examples everyone’s heard of, but fills in gaps, especially from the French and German speaking world. To put this another way, I follow this field closely, I’ve written articles on some of these issues before – and I learned a lot.

It will be particularly useful to researchers who are sometimes unaware of prior art in this field, with findings scattered across obscure journals and websites in many languages. And what’s particularly exciting from a research view is that all these studies constitute a very long term, large ‘natural experiment’ – nulling out many confounding co-factors present in conventional studies of bees stressed out in unnatural conditions. TF beekeeping has been ignored for a long time precisely because its non standard methods make direct comparisons tricky… but as data on different approaches has built up since ~1990, this breadth has become a strength, showing consistent results across many conditions. And this book is the map to those studies.

What is not covered

It is illuminating that very few words are given to consider diseases – this is because most of them are only a problem in the stresses of intensive intrusive beekeeping, they just don’t factor much in a treatment-free beekeeper’s life. There’s little difference in management for animal pests and predators so, they are only mentioned in passing.

A curious hole in everyone’s data, which a number of citizen science projects are now addressing, is numbers and survival of wild bee colonies. It’s particularly frustrating in retrospect as this is where most naturally evolved varroa resistant stock originated. Perhaps a future edition will be able to discuss loss rates and health in these and the related, lightly managed, Zeidler and log hives.

I’d have been interested in more detail on the progress of scientists and very large scale commercial breeders to produce hygienic bees, but it’s fair enough to focus on what has actually worked thus far, and that’s generally working on a smaller scale with local stock.

The UK represents 12 of the 30 examples of TF beekeeping. I think it could have been even more useful if it also covered more French and Irish practitioners and studies. These countries have a strong tradition of using local (black) bees, and like Britain there is a less prescriptive attitude to beekeeping, and some extensive TF and wild bee research projects.

Available from www.northernbeebooks.co.uk and the usual online resellers.