Chasing Bees back in 2016 – by Pauline Walsh 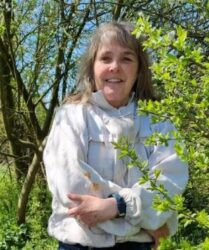 Collecting swarms and handling bees comes with experience. This is how it went back in 2016.

First swarm call was on the 12th May; the bees had gone into a chimney. On my arrival the following day, the swarm had gone – they were only resting in the chimney.

The next day I checked my own hive in the vicinity. I tried to do a sugar shake test for Varroa, but the bees were too angry. This is when I realised that a swarm had left the hive (2 brood boxes full of bees). These bees were the ones I had lured out of an ash tree last year; I went back to the tree, and YES! they had decided to camp there again. I know this is very early to swarm, but I checked the dates of my phone messages and they are correct. I will keep an eye on these bees to see if they are born survivors, who may help with the varroa resistant strain we are trying to achieve.

May 28th – “Bees are back, Pauline!” was the call from my friend Trevor, whose attic we investigated last year (they were gone at that stage). The following day my friend Mick came along with me to see if we could remove the bees, but as they were between the fascia and the external wall we had our work cut out. Tip from John O’Sullivan – spray bitter almond oil at the site where the bees are trying to set up home and they will leave. I set up a bait hive in the garden on 30th May, climbed up into the attic with my 4 year-old  grandson, and sprayed the corner where the bees were settling. We left at 6.30 that evening.

Next day came a call from Trevor – “ I can’t go into my garden, there are millions of bees there!”The almond oil had worked and the swarm had left the building and gone into the hive. I decided to leave the hive alone until Saturday, when Mick and I went in to collect them, and also seal up the hole in the fascia with expanding foam to stop more invasions.

The hive was transported and left to rest for a few days before transferring the bees to Mick’s top bar hive, which he had constructed himself. Now we have Mick and his wife Christian buzzing with excitement! On the first visit they have 6 frames of eggs and larvae, and the bees are very docile. Christian is a natural at this, not at all squeamish on her first visit to the hive. The joy of showing her larvae, comb, pollen, eggs, honey and the business of the construction workers!

Happy that I had removed and re-homed Trevor’s bees, I was relaxing on Tuesday 7th June, when a call came from a friend who was on holiday in Spain. “Pauline, can you hear me? The bees at Diane’s (which had overwintered in an ash tree) are swarming and coming into the house.” I raced over to their place with two year-old Conor and four year-old Luke in tow. Thank goodness for Leslie Hartigan’s lecture on swarming two weeks before! I got water and sprayed it around the bees to give me time to get home and collect gear.

Back in twenty minutes ready to go. Diane’s 3 boys were  to come too so we let all 5 lads watch from the conservatory.

Diane came out with her camera and videoed me as I was working. I must say, this lady is a cool girl (and possibly a beekeeper in-the-making), as she had no protective gear on. “I just pretended I was a tree,” she said. The bees settled in a lovely location on a young cherry tree. I got them into a bucket and covered it, hoping I had the queen inside. Walked away to give them time to settle, and ‘Yes! Score!’ – bees in the bucket, so she is there. I let them settle for a while in the shade while I dropped the boys home. Later I brought the bees home and hived them in a brood box in my garden. Happy me, happy bees, happy boys.

The good deed of getting Mick his bees gave me the good luck to have another colony at my house.

Since we took the bees from Trevor’s, he has called again and I have been back to set up bait hives and use almond oil in the attic. There are two hives in his garden, and he says there is a lot of activity.

This beekeeping business keeps you busy – I wonder what I did before I got my girls? I would not be without them now, they have me well and truly hooked. As I have said before, I have bees in my life, but they keep me, not me them! 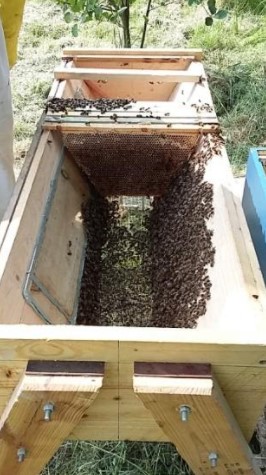