“It Only Takes One!” (Asian Hornet) – by Colette O’Connell 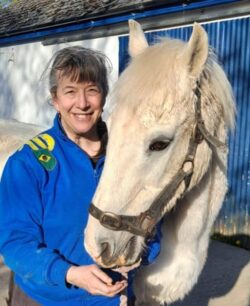 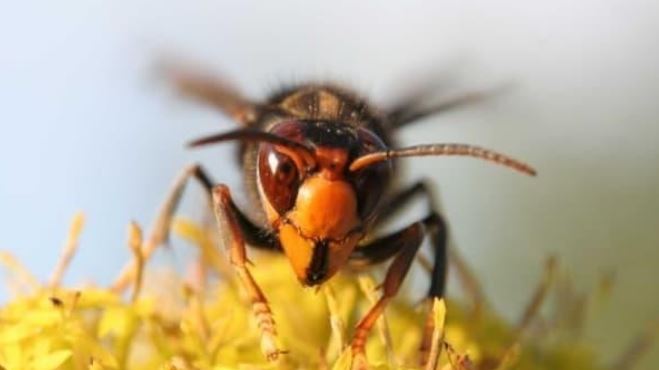 Photo copyright & courtesy of the BBKA

Beekeepers here in Ireland are only too aware of the threat of foreign alien species to honey bees and other pollinating insects in our country.  The Asian Hornet, Vespa velutina nigrithorax, a species native to Asia, has been moving ever closer to Ireland’s shores.

Having now been found (as individuals and nests, but not established) in England, it was only a matter of time before this predatory insect arrived here, and last week, the fears of beekeepers were realised with a confirmed finding of an Asian Hornet, in Dublin.  The insect was alive but in poor condition and dying when found; with no evidence of a nest in the vicinity where it was found.  It was thought to have entered the country in a crate of fruit.

Beekeepers throughout the country need to be ready, as the arrival and establishment of this predator will wreak devastation on already pressurised honey bee colonies and other pollinating insects in serious decline.

The IRISH BEEKEEPERS’ ASSOCIATION CLG, hosted a webinar last December with John De Carteret, a founding member of the Jersey Asian Hornet Group and Alastair Christie, the Jersey Government Asian Hornet Co-ordinator, to educate its members and all Irish Beekeepers  and the public about this formidable predator.

The Asian Hornet was first reported in Jersey in 2016, and since 2017 the Jersey Asian Hornet Group (JAHG) a small group of beekeepers, naturalists and others have been actively tracking and destroying nests, of which in 2019 they found 83…!

The Asian hornet (Vespa velutina nigrithorax), also known as the yellow-legged hornet, is a species of hornet indigenous to Southeast Asia, an area with wide ranging temperatures and environments. It is of huge concern as an invasive species in some other countries and a major threat to native biodiversity around the world.

John and Alastair advised Irish Beekeepers that we need to be active NOW.   We need to put the work in now BEFORE this predator becomes established in Ireland, wreaking havoc as just one fertilised Queen did, which spawned the invasion of Northern Europe.  (In 2004, one Asian Hornet fertilised Queen arrived in Bordeaux, France, in a consignment of Chinese Pottery.  This ONE Queen is responsible for the colonisation of ALL of northern Europe, with colonies now widespread throughout France, Spain, Portugal, Belguim and Germany, and spreading outwards and further afield.)  Recently an Asian Hornet was found in Hamburg, Germany.  It was assumed that the insect had come into the country by ship from abroad, as the nearest known Asian Hornet nests was 350km away.  However, DNA tests on the insect confirmed that it was from the French colonies descendent from that same AH Queen from 2004. These insects will avail themselves of human transport to get around!  (Alastair Christie also advised us  that Hamburg is on the same northern latitude as Dublin, so these insects are moving further north and surviving too)..!

Whilst we remain 250 miles from Europe, we have the established links, ferry crossings with more promised because of Brexit.

With Brexit and current links with France, we can expect more of these opportunistic predators arriving from France.  John De Carteret showed the following slide to the webinar, to emphasise this inevitability (with the countryside around the port of Cherbourg in Normandy, having a particular high Asian Hornet count) and with Brexit, more ferry links and channel crossings are proposed.

We need your assistance now.  We need YOU, the public to be vigilant and aware of this insect, and to report any sightings of it immediately.   Statements from Declan Harty, Agricultural Inspector, Horticulture and Plant Health Division, Beekeeping and Honey Section,  DAFM, (Department of Agriculture, Food and the Marine, see attachment,), and the National Parks and Wildlife Service, NPWS, advise the public on what  to do if they suspect a sighting of this Hornet.

“Action in the case of suspect cases of Asian Hornet:

The NPWS press release contains links and information for the Asian Hornet. This includes identification material and what to do if a member of the public makes a sighting. Ideally if a beekeeper has a possible sighting, in the first instance we would ask that if they have a picture that they submit it to beekeeping@agriculture.gov.ie.

DAFM’s Bee Health laboratory and entomologist will be able to asses. As stated in the DAFM information sheet “Please notify the Department of Agriculture, Food and the Marine (DAFM) or the National Parks and Wildlife Service (NPWS) of any suspect Asian hornets, providing as much information as possible (location, photos etc.).

If it is possible please send a dead sample to DAFM for examination. The specimens can be killed by placing them in domestic freezer overnight. If collecting a sample please take all necessary precautions as hornets can sting. Please firstly seek advice using the details below or contact the NPWS. Horticulture and Plant Health Division, Department of Agriculture, Food and the Marine, Backweston Campus, Celbridge, Co. Kildare. Phone: 01-5058600 Email: beekeeping@agriculture.gov.ie “

On behalf of the members of the Irish Beekeepers Association we ask you to look at photos of the insect here.  Recent media reports carried photos of insects purporting to be Asian Hornets (Vespa velutina nigrathorax).   These mistakenly showed photos of other species of hornets, not Vespa velutina nigrithorax  false identification can lead to otherwise beneficial pollinators being mistakenly killed.

These insects in certain circumstances can pose a threat to humans; the Asian Hornet is particularly aggressive at its nest sites, with a painful sting, with evidence in Europe of several fatalities. Those people with anaphylaxis need to be cautious.  Numerous stings can induce a condition called toxic shock.

How to spot and Asian Hornet.

They are black with an orange / yellow face and have a velvety black /dark brown mid body.  Their rear has brown segments bordered with a fine yellow band whilst the band closest to the tail is almost entirely yellow / orange.  The legs are brown at the top and yellow at the bottom, hence the name “yellow legged hornet”!  Asian Hornets grow between 17 and 32 mm which is bigger than the 15 – 20 mm for wasps.

Photographs of the Asian Hornet and its nest below, courtesy of John De Carteret