The Black Jar honey competition is a “taste only” judgement, where aesthetics of one’s entry are totally ignored, and the best tasting honey is the winner.

During a standard honey show, before a drop of honey hits the judge’s palate, the entries are meticulously scrutinised for visual defects that have strayed from the rigid requirements, such as fingerprints on the glass, bubbles in the honey, or honey touching the lid. Ordinarily, just one of these infractions will deem an entry invalid, no matter how delicious the honey might be. As such, it is conceivable that the best tasting entries may never be properly appreciated. The Black Jar concept aims to level the playing field.

The competition is not a new idea, having been in existence for at least two decades on paper, but in practice is just starting to take off in the US.

When the Munster Agricultural Show was looking to add a honey competition that could be manageable in the climate of the pandemic, the Black Jar concept ticked many boxes.

The organisers were able to get the assistance of the inventor of the Black Jar concept, Mr. Michael Young MBE, and he was happy to offer his expertise and judging experience for the show. It also happened to be the first ever Black Jar event on this side of the Atlantic, so it was fruitful to have his guidance!

Dozens of entries were dropped off at arranged pickup sites, with still more being posted in directly, which made for a full room of honey to taste!  For 3 hours the honey judge and his stewards scrutinised the entries in mini group tastings, adding the best group winners to the top table for later judgement against their peers.

Finally, after all the entries were classified, the ultimate 1st place was awarded to Nora O’Driscoll from Doneraile in Co. Cork, a beekeeper in her first year of beekeeping with her first hive, proving that the tastiest jar of honey doesn’t necessarily come from a big commercial outfit. 2nd place went to Joey Redmond from Co. Wexford, and 3rd to Tom Frawley from Kilmaley in Co. Clare.

Its first honey competition being a success, the Munster Agricultural Show hopes to repeat the event annually, giving all beekeepers an opportunity to slug it out for the best tasting honey in the show and bragging rights to same! 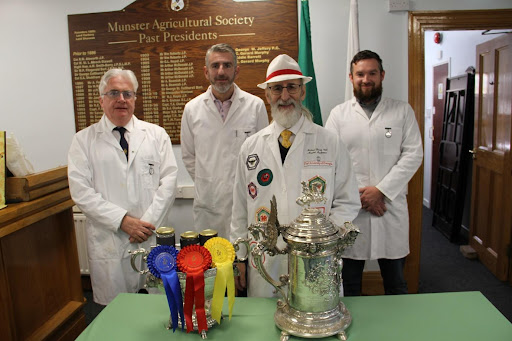