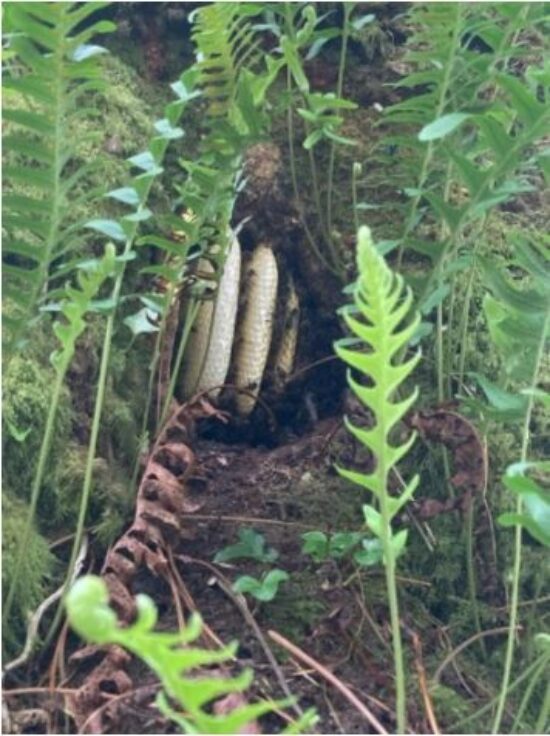 Feral bees in a tree

Apis mellifera mellifera, the only native honeybee subspecies in Ireland, was once feared extinct in the wild. Some of the causes of this loss are parasitism by Varroa destructor, habitat loss, and the effects of agricultural pesticides. The major threat of extinction is hybridisation and replacement by other subspecies; through this process, sub-species and ecotypes can lose genes and gene complexes adapted to their local environment, thereby reducing their fitness.

Since Apis mellifera mellifera inhabits much of Northern Europe, which is a territory with wide variation in climate, the honeybees in Ireland could be referred to as ecotypes. They have characteristics finely adapted to the specific ecological environment and conditions of this country.

This subspecies is a highly valuable gene pool and is of considerable conservational interest. It was a great discovery then when hundreds of wild honeybee colonies were found throughout the country, thanks to the Wild Honeybee Study.

This study was launched in late 2015, when a recording tool was established whereby people could report the locations and certain characteristics of wild colonies via an online portal.

Most of the investigated colonies have been reported by members of the general public, with the majority of reports involving colonies in urban areas, living in cavities in walls and roof spaces. These colonies were sampled and examined, both by morphological and genetic analysis, and it was found that the free-living population was largely comprised of pure A. m. mellifera.

The question then arises as to whether honeybees are present in forests here in Ireland. This is the input my project started with; I began to do some research and found that a significant number of Irish woodlands were potentially suitable habitats for wild honeybee colony nests. Despite the relatively low forest cover in Ireland, some ancient and long-established woodlands are still present and considered to be of high conservation value.

We have therefore developed a methodology to search for wild colonies in such potentially adequate sites. We tested and applied, for the first time in Ireland, this set of guidelines, which had already been considered successful in the UK. For example, there are certain habitats that bees seem to have a preference for. The most common tree occupied by honeybees seems to be the oak, followed by beech and ash.

This was my first wild honeybee nest, in a dead tree in Barna Woods (Galway). It is in fact common for bees to take advantage of broken branches or damaged trunks.

Another giveaway for the presence of bees is fungal activity, that can be evident externally as the fruit of the fungi.

Feral bees in a tree

When I get to a site and find a wild honeybee nest, I put on my bee suit and get closer to the bees in order to collect some samples from the colony.

I do that with a bee hoover, a tool that helps me gather them. The optimal samples for the analysis would be around 40 bees. This might sound a lot, but it does not hurt the colony at all (a hive can contain up to 50,000 honeybees!).

I then put them in a small fridge that I keep in the back of the car; this will make them fall asleep.

In order to perform the analysis, samples must be frozen. I then take off heads, wings and legs for morphometrics. What is important for genetic analysis, on the other hand, is the thoracic tissue: it will give us information on the health and pureness of the colony.

It was not recommended for me to visit forests around Ireland and look for wild bees all by myself, so I was lucky enough to have several people helping me, both in Galway and other counties I visited.

Sampling bees in a residence

It is always good going around with a friend, especially a tall one, so she can help reach higher places!

Most of the samples I have collected, however, are from private houses and members of the public who reported colonies through the National Biodiversity Data Centre portal.

Bee colonies can be found in the most disparate places: walls, roofs, chimneys, gutters… even in compost bins!

This summer I visited plenty of houses and met the friendliest people around county Kerry and Cork. Everyone has been very welcoming and interested in my research. I was pleased to see how much people care about these beautiful and interesting creatures.

My project and my Erasmus will end at the end of October, but funding has been approved by Science Foundation Ireland to continue this research for the next four years. The research supports the Native Irish Honey Bee Society in their efforts to protect and conserve A. m. mellifera here in Ireland.

If you come across a wild hive and wish to contribute to this study, you can use the National Biodiversity Data Centre recording tool at https://records.biodiversityireland.ie/record/wildhoneybeestudy.

“Why Do we Need Bees” – Book Review by Declan Magee